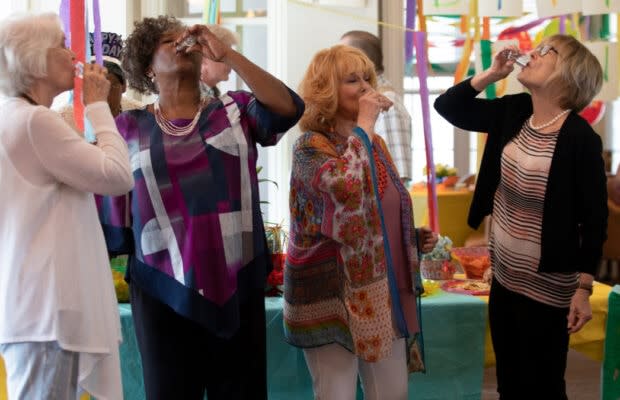 A love story set in a retirement home is a sweet premise, and when you stack the cast with greats like Ellen Burstyn, James Caan, Jane Curtin, Ann-Margret, Christopher Lloyd, and Loretta DeVine, greatness is expected. But in director MIchael Lembeck’s “Queen Bees,” the overly simplistic nature of the script becomes both pragmatic and detrimental, never allowing any character the depth they are owed while providing just enough of a formulaic plot, one that asks nothing more than for you to enjoy the ensemble.

Helen (Burstyn) is an independent woman in her 80s whose daughter Laura (Elizabeth Mitchell, “Lost”) and grandson Peter (Matthew Barnes, “Strange Angel”) are getting worried about her living alone. The matriarch constantly refuses her daughter’s suggestions about moving into a nearby retirement community until the day Helen accidentally sets her kitchen on fire. She finally agrees to live in the retirement community, for one month, until her home repairs are completed.

Helen quickly learns who the mean girls of Pine Grove are by getting on the bad side of Janet (Curtin), while befriending Margot (Ann-Margret) and Sally (Devine). Soon Helen finds herself not only enjoying her time at Pine Grove but also starting to consider love again, after she meets and is wooed by the community’s newest resident, Dan (Caan).

From the visual style to the storytelling, “Queen Bees” envelops itself in simplicity, served up like a warm dish of comfort food that’s had some of the flavor microwaved out of it. Production designer Dara Wishingrad (“The Photograph”) paints Helen’s world in cool pastel tones — so much so that when warm hues appear in later scenes to emulate the feeling of falling in love, it feels like a different film, and not in an intentional way. Cinematographer Alice Brooks (“In the Heights”) sometimes shoots the retirement community to look like a hotel, which only contributes to the flatness of the relationships that are forming there.

The script by Hallmark veteran Donald Martin, based on a story by Harrison Powell, reads like wannabe early-aughts Nancy Meyers, with a less misogynistic “Taming of the Shrew” subplot. The lack of substance in the writing becomes most apparent in the portrayal of female friendships. Those relationships have always represented a complex dynamic, but “Queen Bees” — unlike similar films about women over a certain age, including “Something’s Gotta Give,” “It’s Complicated,” and “Book Club” — barely attempts to explore them with any kind of depth.

And while Devine is a gem in this film, bringing warmth and energy to every scene she’s in, it’s hard not to see her presence here as a kind of tokenization. Sure, her character has a backstory, but why does she align herself with three white women who call themselves “mean girls,” and why does she have no relationship at all with the only other Black woman in the film?

For all the superficiality and shortcomings of “Queen Bees,” the film’s biggest draw, and strongest attribute, is its packed ensemble of iconic actors. Burstyn and Caan create the kind of chemistry that will make audiences care about their relationship and whether or not it will come to fruition. It’s easy to see why these talented performers are still booking jobs in their 70s and 80s because even without strong material, they alone make the film worth watching. (Strange, though, that the producers missed the opportunity to exploit “Third Rock from the Sun” nostalgia by pairing Curtin and co-star French Stewart in a scene together.)

“Queen Bees” won’t win any awards, and it is far from being a classic rom-com, but it’s certainly a film to consider if you’re taking your grandmother out to the movies. If nothing else, it’s trying to shine a spotlight on some older characters — and older character actors — and one can hope more films like this get made, only with a better sense of what womanhood and friendship looks like in the golden years.

“Queen Bees” opens in U.S. theaters and on demand June 11.