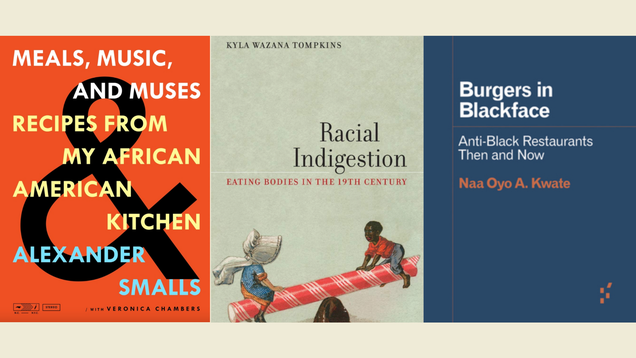 In recent years, Juneteenth has become another date to celebrate all facets of Blackness—and that, of course, includes the food. Because it’s June, everyone loves an excuse to set up their grill or pit or whatever method of fire bearing, meat-smoking device they so choose and light the F up.

But do all of these people know the history behind these dishes? Why they cook what they cook and how it has been celebrated and coveted for centuries? So many Black chefs have taken on the additional role of historian in search of these answers, whether it is chronicling the history behind one of their own dishing or amassing over 150 different cookbooks dating back to 1827.

Leah Chase and Edna Louis are key players in commemorating the importance of southern cuisine, and not many people know of them. Quietly, people whisper about the racism that exists within the restaurant industry, but it isn’t spoken about as loudly or as much as it should be. Burgers in Blackface is one of many books that look at the commodification of Black people and the gross use of Black face to sell food to (not so) ignorant and (very) racist consumers.

Oftentimes, people ask, “well, what even is American cuisine,” and fail, time and time again, to include the history and cuisine of Black Americans in their answers. In celebrating Juneteenth by going out, barbecuing and honoring those who were once enslaved, it is crucial that we learn from their experiences and remember the work they put in to put Black cuisine on the map.

Chicken. We’ve all tried it, heard of it, have some story or another as to why it’s a staple on our kitchen table. But Psyche A. Williams-Forson dives even deeper into the cultural importance of chicken and its place on the table. Williams-Forson “examines the complexity of Black women’s legacies using food as a form of cultural work.” In doing this she has been able to expose the deeply ingrained stereotype surrounding women and the idea of “women belong in the kitchen.” Building Houses Out of Chicken Legs explores the negative connotations around Black people and Black culture and the connection to chicken. Williams-Forson focuses on “the ways Black women have forged their own self-definitions,” going so far as to rename the chicken as “the gospel bird.”

Building Houses Out of Chicken Legs takes personal experiences, comedic sketches, fine art and media portrayal and turns it into a collection that explores the reality of Black culture and how Black women work to shift a negative narrative.

There is a distinct connection between vulnerability, acceptance and independence that goes along with the act of eating. There wasn’t much of an exploration of this connection until recently, and even then, it didn’t scratch the surface. Kyla Wazana Tompkins explores the “links between food, visual and literary culture in the nineteenth-century United States” and focuses on exposing how eating can also be seen as a political act of defiance. More than that, the book seeks to be a guide and understand how food is something to be treasured and not a commodity—particularly in the sense of contemporary “foodie culture.”

Let’s talk about the commodity that is racist ideals when it comes to food. We all know of Aunt Jemima, Uncle Ben, Chef Rastus, right? The constant need for suppliers to endorse and profit off of Blackface goes back further than syrup bottles and instant rice. Naa Oyo A. Kwate examines the marketing concepts that “center around nostalgia for a racist past and commemoration of our racist present.” There has been no end in sight for outwardly racist logos and Burgers in Black Face continues to expose how anti-Black the restaurant industry is and the limited actions taken to end the problem.

Discrimination and dispossession are just two of the many reasons why the number of Black farm and landowners dwindled from 14% in 1920 to less than 2% today. The management of farms is predominately white, but the actual labor is mostly people of color who are disproportionately exploited and forced to live in a “food apartheid.”

Farming While Black is the first of its kind: a clear cut and dry guide on how Black people can form relationships with their land and “reclaim their dignity as agriculturists,” and teach all farmers, Black or white, of the centuries-long history that exists for Black people and farming. Soul Fire Farm, created by author Leah Penniman, is home to the Black and Latinx Farmers Immersion which serves as space for new farmers to learn growing, maintaining and basic food cultivation skills from people of color who come from shared experiences.

What happens when you mix opera and food? You get the iconic chef and world-renowned singer Alexander Smalls and the history—and recipes—of his African American kitchen. Combining his two passions, food and music, Smalls takes readers on a journey through the history of food and its impact on the south while providing delicious recipes for you to learn from and enjoy on your own. Complete with mouth-watering recipes for Hoppin’ John Cakes with Sweet Pepper Remoulade and Carolina Bourbon Barbecue Shrimp—holy whoa—this book will inspire you to step out of your comfort zone—or into it—and share Smalls’s passion for food and music with those around you.

Now, this title is very long yet encompasses everything that Gullah culture sets out to teach us: Smokin’ Joe Butter Beans, Ol’ ‘Fuskie Fried Crab Rice, Sticky-Bush Blackberry Dumpling, and Other Sea Island Favorites. OK, well, maybe that’s not all it sets out to teach. Sallie Ann Robinson, a significant figure in Gullah culture, provides readers with the intricate techniques to achieve Gullah cooking and explores how “traditional” southern cuisine will always be linked back to this culture. Daufuskie people have lived on an island off the coast of South Carolina only accessible by boat. Because of the atypical ways in which food was received, the island resident relied on the fresh ingredients they could get their hands on. Robinson presents one-hundred home and family-style dishes ranging from salads and sides to meat and game.

“Here are my family’s recipes,” writes Robinson, as she “weave[s] warm memories of the people who made and loved these dishes and clear instructions for preparing them.”

Leah Chase is the Queen of Creole Cuisine and her cookbook depicts just that. Recognized by the James Beard Foundation, earning herself a Lifetime Achievement Award and more, Chase more than lives up to her royal creole legacy. The Dooky Chase Cookbook provides recipes from her numerous restaurants, her personal creations and weaves the stories of her upbringing between the recipes, telling the readers of the importance and influence of her creole heritage as a guide to understanding all facets.

American cuisine is Black cuisine. There, I said it. Edna Louis says it too, and celebrates the “uniquely American country cooking she grew up with.” Louis’s up bring was too uniquely American—raised in a small farming community in Virginia established by freed slaves. The Taste of Country Cooking features recipes for any time of year, each based off of whatever was in season. Springtime included wild mushrooms and field greens where summer had bright gardens vegetables and different cuts of pork. Within these pages, Louis gives us a glimpse into her home and invites us in with open arms and “shows us precisely how to recover” from the traumas surrounding Black people from the comfort of our kitchens and sharing food with those held dearest.

The history of food is something that all chefs take seriously, but none as seriously as Kwame. Before he turned thirty he had opened and closed one of the best and most talked-about restaurants in this country and bounced back from selling and doing drugs in the Bronx. This journey led him to Nigeria where he was sent in order to “learn respect” and what he found there sparked a new mission inside of him. After selling candy on the subway and saving up more than twenty-thousand dollars, he went on to start his own catering company, star in Top Chef, come back to Top Chef as a judge this season and never let his love of food die.

But like all Black chefs, Kwame was hit with the unrelenting racism towards chefs of color in the industry and in his memoir, Notes From a Young Black Chef, he explores the “intersection of race, fame and food,” through a culinary coming-of-age story from a young Black chef.

The Aunt Jemima figure has been plaguing the importance and role that Black women have on southern cuisine long before the sickly-sweet syrup was produced. After spending countless years hunting down recipes, she is now the owner of one of the world’s largest private collections of cookbooks created by Black chefs and authors. The Jemima Code features more than 150 Black cookbooks dating all the way back to 1827—a rare servants manual. The book also includes some of the classics such as Edna Lewis and Vertamae Grosvenor. Presented in chronological order, these recipes solidify the reality that Black Americans are the backbone of American cuisine and can create delicious and brilliant dishes from the barest of ingredients.