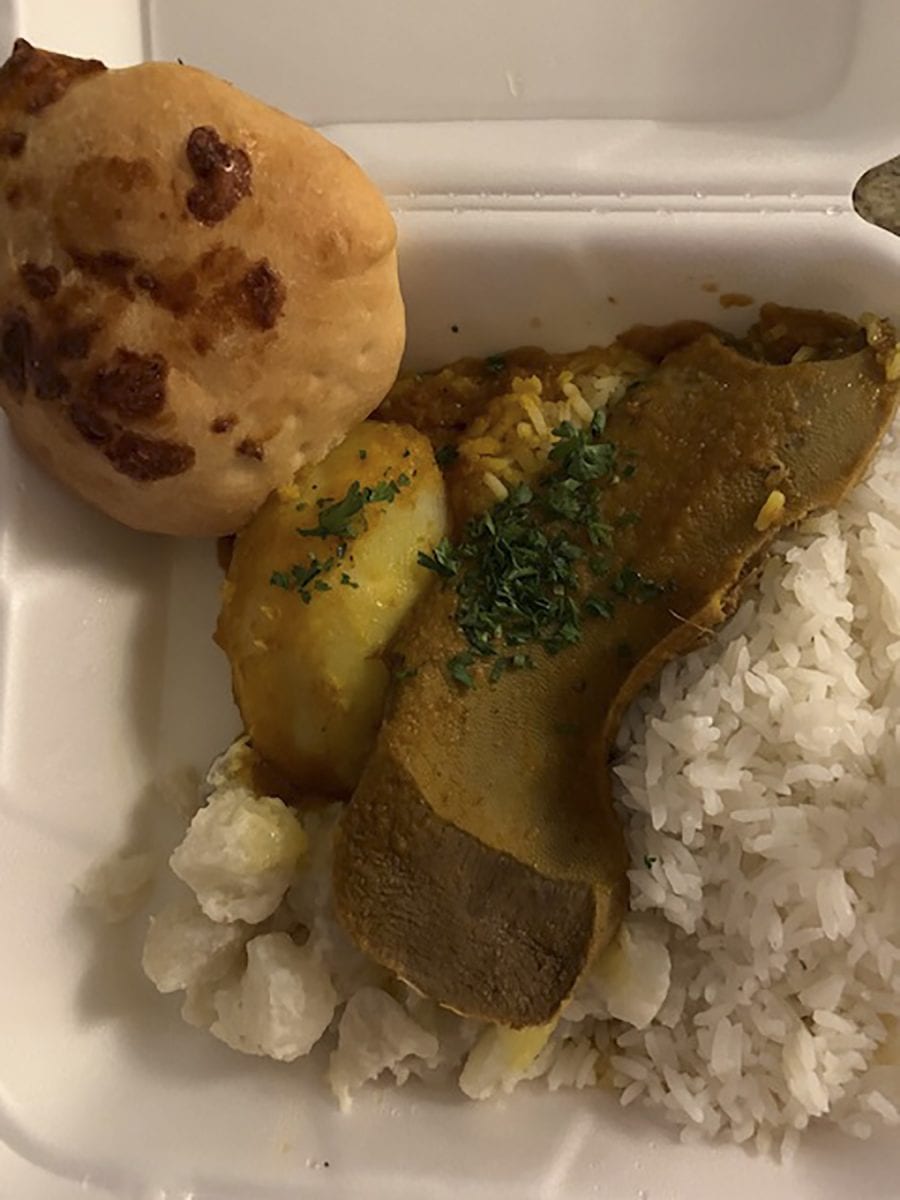 While driving up and down on Lee Highway, you may not have noticed Luzmary’s Bolivian restaurant, but once inside, it’s not soon to be forgotten.

The exterior of the building belies its interior which is much larger than a new customer might expect, with a big eating area inside and out, and a bar.

The restaurant prides itself on authentic Bolivian cuisine, including salteñas and cow tongue.

The entree at Luzmary’s comes with rice, two kinds of potatoes simmered with chicken in a spicy sauce (picante mixto, $14.99) or with breaded steak, similar ingredients and tomatoes and onions (falso mixto, $14.99) and, lastly, the solo tongue (picante de lengua, $14.50).

The taste was a tender tofu, rather bland and chewy, a mite damp, like the cow had just sipped a beverage. I thought I would impress my colleagues with my menu choice at Luzmary’s, but I failed: They had already eaten it! (My world is small.)

During the middle of the day, Luzmary’s bustled with customers and an attentive staff. Marisol Gonzales is the owner/manager who took time to chat with me about her restaurant.

She laughed at the tricks Bolivians sometimes play on their American friends at Luzmary’s.

Most Americans shun the prospect of eating tongue, so their Bolivian friends order it secretly for them. “After the Americans eat it, they say ‘it’s delicious,’” she chuckled, “and their friends then tell them what it is.”

Luzmary’s has much more to offer on its menu besides tongue. The salteña, a Bolivian specialty, is a delectably-baked turnover of vegetables, potatoes (Bolivia grows more than 200 kinds) peas, chicken or beef ($2.75) or plain vegetables ($2.98).

Many Bolivians eat salteñas with coffee. They are delicious, nutritious and an incredibly cheap lunch.

Another bestseller at Luzmary’s is the pique macho with slices of steak and a beef hot dog over fried potatoes, garnished with onions, tomatoes, jalapeños and boiled egg ($15.99). It’s similar to the silpancho, a thinly-breaded steak served with rice, fried potatoes, two eggs, onions, tomatoes and optional jalapeños (which is what I ordered). The platter was so large it lasted me three days and was every bit as tasty as it sounds ($14.99).

A menu choice I found irresistible was the fried calamari ($11.99) which was as zestful as any I have eaten: crispy and cooked just right — although I can’t think of any “bad” calamari I’ve ever had.

Not to miss is the magnificent “humintas,” which is listed as an appetizer, but its sweet taste made me think more of a dessert. It’s something like your grandma’s cornbread, but better; a rich dewy delicacy you eat with your hands, similar to corn bread pudding (with fresh corn, of course!), but with a little bit of undetectable cheese and you hold it with a corn husk wrap ($2.49).

To satisfy customers’ sweet teeth, Luzmary’s has a few desserts which it “imports” from a local supplier.

“Bolivians don’t eat that many desserts because the platters are so big,” Gonzales explained. One community hit is the flan: “Some of our neighbors come early in the morning to get it for their coffee.”

Luzmary’s serves a Bolivian drink of peach juice, cinnamon, cloves, and “lots of sugar,” Gonzales said. Since I am used to sugarless tea (and have to watch calories), it was a bit too sweet for me. Being a beer drinker, though, I was eager to try the Bolivian craft, but my stomach was about to explode, so I decided to halt my intake while still conscious.

The eatery also has soups made daily from scratch, which frequently sell out, and to satisfy customer requests it serves Mexican entrees, too. They include chicken, steak, shrimp, fajitas, tortillas, tacos (beef tongue is an option), rice and beans ($10.99 to $16.99).

The name of the restaurant is a combination of Gonzales’s first name and her mother’s, Luzmila Ampuero, who started the duo on restaurants. After Ampuero arrived in the U.S. several decades ago, she went to work for Burger King and later opened her own restaurant in Falls Church, which she ran for about 15 years until selling it in 2014.

Now, the mom helps her daughter, “a lot, a lot,” Gonzales repeated. Luzmary’s recipes date back to Gonzales’s grandmother in Bolivia.

During the pandemic, Luzmary’s received a government loan and her business thrived. She didn’t need another one.

“Our customers needed to eat, and they kept coming,” she smiled. She praised her landlord for helping her start her business and permitting her customers to park at the adjoining motel which he owns.

Gonzales and her family live in Falls Church, where she graduated from George Mason High School.

Before she opened on Lee Highway, she considered other areas, but “we really like Falls Church City and wanted to stay here,” and so she did. According to the 2010 U.S. Census, more Bolivians live in this region than anywhere else in the U.S.