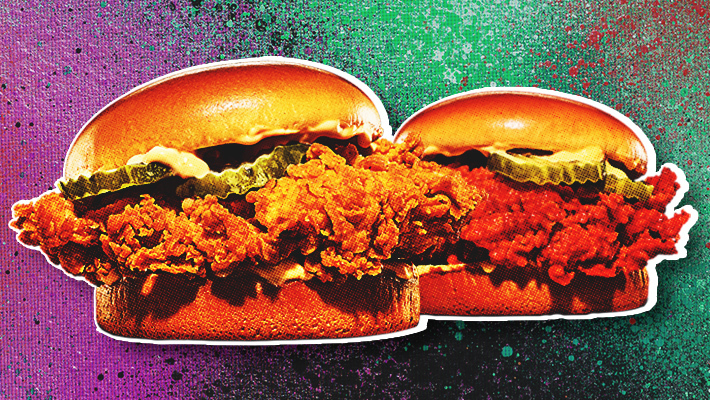 Over the past year, I’ve been on a quest. Exploring the deep reaches of the fast food universe to rank everything from the best chicken sandwiches to the best double cheeseburgers. French fries, shakes, and even napkins have fallen under my gaze.

It’s been a wild journey, and in my travels, I’ve noticed a few trends. Foremost among these being that Burger King, home of the world’s creepiest fast food mascot (which is saying something when you have Ronald McDonald, who is not only a clown but frighteningly tall ), consistently ranks near the bottom. Every time.

Does that mean I have something against Burger King? No, not at all.

In fact, I actively root for BK, hoping to be surprised to find that they’ve actually done something right. I long to have my preconceived notions upended. But it hasn’t happened yet. Burger King is bad at almost everything. Even shakes, which… how?! So when my editor called me on the first day back from a brief vacation to alert me that Burger King had just unveiled a brand new chicken sandwich and I’d need to return from my self-imposed fried chicken sandwich eating retirement to tackle one last job (last, who am I kidding), something broke inside of me.

Once I hit the internet, I found out that it’s actually not one sandwich but two (four, technically). The Ch’King sandwich, which is topped with pickles and sauce, and the Spicy Ch’King, which has pickles, sauce, and a hot glaze, and two deluxe versions of those sandwiches featuring lettuce and tomatoes. This news reignited a passion in me for fried chicken sandwiches that I thought was lost forever, like Laika the dog (it’s a grim reference, don’t click the link).

Why did it get me hyped? You mean to tell me that Burger King felt so confident in this new sandwich, that they doubled down? Count me in!

Then I watched the commercial, titled “Nightmare” featuring narration from Paul Giamatti. And, cool as a Giamatti cameo is, I was right back to thinking Burger King doesn’t know what the hell they’re doing. Sometimes I feel like these fast food companies forget that they’re supposed to be selling us food, not making weird internet content. Why are you advertising a chicken sandwich with this f*cking image?

Fever-dream-and-vaguely-Get Out-inspired commercial aside, at least the internet got this sick Chick-fil-A burn from Burger King’s Twitter account out of it.

during #pride month (even on Sundays 👀) your chicken sandwich craving can do good! we are making a donation* to @HRC for every Ch’King sold 🏳️‍🌈

Got ’em Burger King! Donating the money first and not tying it to the sale of a chicken sandwich would’ve been better, but hey, as far as shallow gestures from big corporations during Pride month go, this one was at least suitably petty.

Without further ado, let’s get into these sandwiches and see if Burger King has finally done the thing and introduced a new food item that we can actually proudly recommend you spend your money on. Though again, judging from that commercial I didn’t go into the ranking optimistic.

In fact, I was downright frightened.

The Crispy Ch’King consists of a hand-breaded chicken breast filet, thick crinkle-cut pickle chips, and a smattering of savory sauce on the top and bottom halves of a potato bun. So far so good, at least on paper, and while the actual sandwich doesn’t look quite as grand as the way Burger King pretends it looks in advertisements, it’s pretty damn close. Visually, I’m happy with this sandwich, it doesn’t look quite as presentable as a Chick-fil-A sandwich and doesn’t have that mouth-watering eye-candy quality of Popeyes, but it looks good, if not a bit overcooked.

Biting into this thing I’m welcomed by a pleasingly audible crunch, thanks to the thick batter the chicken is encrusted in. It’s noticeably crunchier and more flavorful than Burger King’s old Crispy Chicken Sandwich. I wouldn’t say you could tell that it’s “hand-breaded” but it does feel like some definite attention was put into it — it’s the highlight of the sandwich. The chicken, on the other hand, was a bit on the dry side. The meat flaked apart like dry breast meat tends to do. I don’t know if this was a result of my sandwich being left in the fryer a bit too long, but after you get that initial flavor of black pepper there was little else to hold onto.

I’m assuming BK is aware of this, which is why they double sauced their buns, spreading a mayo-based “savory” sauce on both ends to create the illusion of juiciness. As far as I can tell, this doesn’t taste too different than your standard mayo, it has a slightly sweetened vibe to it but if I didn’t know it was “savory sauce” then I would’ve just assumed it was mayo. Get wild Burger King, put a dash of Worcestershire sauce, ketchup and garlic in there and you’d have a sauce worthy of putting on both buns. This sauce just seems uninspired.

I have to commend Burger King on their pickles though, it’s really easy to half-ass a pickle and while I think the sandwich could do with more, the three pickles I received all added a tart bite that paired well with the crunchiness of the sandwich.

This sandwich is halfway to being a great chicken sandwich, it has a good crunchy batter with a nice pepper-forward flavor, but it’s a bit one-note. It’s begging for some complexity.

For the spicy version of this sandwich, I went with the Deluxe over the standard, which meant no pickles but you get lettuce and tomato. Let me say this right off the bat — don’t get the Deluxe. It’s a waste of time, Burger King’s lettuce is sad and wilted and their tomatoes have to be the palest shade of red I’ve ever seen from something that grows on a vine. I think had I gotten pickles, this sandwich would’ve provided an even better experience because I like this one, a lot.

It’s not going to make Popeyes, Chick-fil-A, or Wendy’s flinch and have to innovate to keep their top-tier sandwich status, but it blows my mind that something this flavorful came from Burger King.

It’s easy to say a spicy sandwich beats a non-spicy sandwich, this sandwich has an extra flavor component to hang on to thanks to the spicy glaze that is brushed on the chicken, but I wouldn’t exactly classify this sandwich as “spicy.” The pepper glaze just compliments the batter’s already black pepper dominant flavor, adding a bit of sweetness to the earthy peppercorn aftertaste that lingers nicely on the lips and tongue. It isn’t spicy so much as it suggests spice, which is kind of interesting and offers a unique opportunity for people who can’t handle spice to pretend that they’re fun. I only wish there was more of it, Burger King’s promotional material would lead you to believe this chicken is bathed in this spicy sauce — it’s not, it’s merely brushed on. Haphazardly, I might add!

The “savory” sauce makes a return here and overall the flavors just compliment each other better, you get that nice crunch leading to that pepper-forward flavor and subtle sweet chili heat, which is reigned in by the double serving of sauce — the more you chew the more the flavors get married together. An easy improvement on this sandwich would’ve been the inclusion of cheese, or you know, probably pickles. But I made the mistake of getting the Deluxe.

Had Burger King provided us with something a little more exciting than a potato bun (it’s an okay choice for this sandwich, but again — not so special) and put just a bit more effort into the sauce, they could’ve had a real winner here. Three chains released new chicken sandwiches this year — McDonald’s, Carl’s Jr, and Burger King — and of the three this sandwich is by far the best. Burger King did it, they made a good chicken sandwich, but if they want to compete with the GOAT, they’re going to have to head back to the lab and make a few improvements.

This is easily Burger King’s best menu item. Order the Spicy Ch’King sandwich (regular not deluxe) over the regular crispy version, even if you think you don’t like spice.