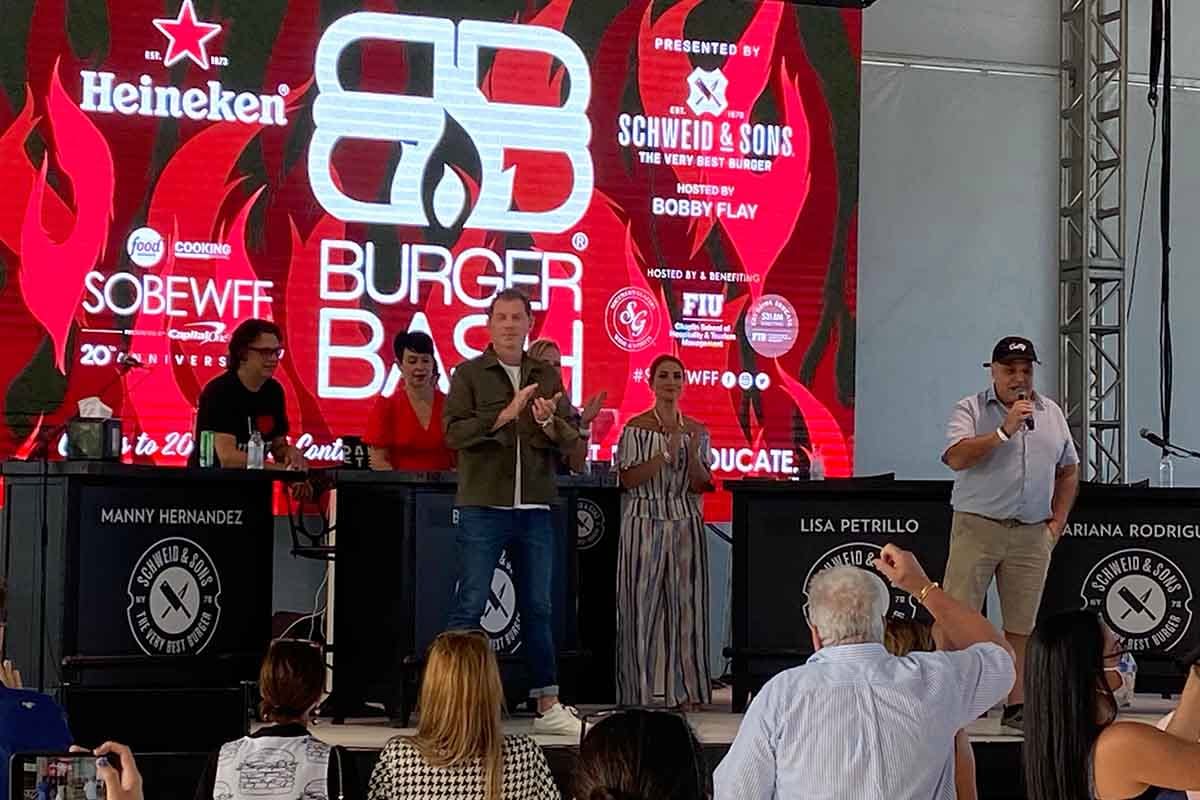 That was Guy Fieri yukking it up on stage during the 2021 South Beach Wine and Food Festival (or SOBEWFF), which took place on Miami Beach over four days in late May.

The megastar chef (and now a very, very rich Food Network employee) was referring both to his past appearances at the fest — something about a frozen margarita machine and demanding Motley Crue’s “Shout at the Devil” as his intro music — and this year’s on-stage demonstration, where he was enjoying several margaritas, tossing T-shirts to the starstruck, somewhat bro-ish crowd and leading his team in a slightly off-the-rails demonstration on making savory mac-and-cheese waffles with chicken, and well, look at the above photo.

Funnily enough, the four-day Food Network & Cooking Channel SOBEWFF — this year celebrating its 20th anniversary — was not a hot mess. As the first big dining event since COVID-19, and one taking place in the cultural and pandemic hotbed of Florida, I was expecting the worst.

But I ended up being pleasantly surprised. Hot, yes. Mess, no. Extremely well organized and polite, very much yes. If anything, the lingering effects of COVID improved the flow and temperament of the event. Dinners were far less crowded, lines were shorter and people (patrons and chefs alike) seemed less stressed and just happy to be there. And thanks to an abundance of staff, police and new protocols (masks in line, temperature checks, a health app that required a daily check-in, etc.), I felt safe.

(I can’t say the same for the rest of Miami, thanks to the near-complete lack of masks and the severe road rage exhibited by seemingly every Lyft and Uber driver.)

“This was a very different year than most,” as Bobby Flay admitted. The star chef actually flew in from his own restaurant’s opening in Las Vegas for a single night in Miami to take part in Burger Bash, the festival’s most crowd-pleasing event. (Ever tried fried queso on a burger? You should.)

While I’d never attended the South Beach fest, I have gone to multiple Wine and Food Festivals in New York, and two companies I’ve worked with have hosted events at the NYC version. I’m not sure I could say I’ve ever had fun at those — all I remember were throngs of boozed-up foodies, minuscule portions and lines, lines, lines.

And there were admittedly a few hiccups here: I could have done without the very loud DJs and their incessant use of mash-ups at the beachside soirees (You wanna hear a “Sunglasses at Night” / “It’s Tricky” hybrid? You don’t? Tough shit, here it is at volume 14). Some vendors ran out of food almost immediately after their events started. And reduced capacity meant some of the more special chef dinners sold out immediately.

And not all the chefs and talent were on board with the revised format. “Are there new protocols in place? There are. Do I like them? No, I think it limits the interaction with the guests,” admits Robert Irvine, the host of the Food Network’s Restaurant Impossible. Irvine, who hosted a boot camp during the fest (I skipped that), told me he not only got COVID early on in the pandemic, but that once recovered, he had gone back out on the road with his show. (“We did 36 shows in the second half of the year. We were the only ones out there. We were doing our job, which was helping people.”)

So for him, it was all about making a quick return to the pre-2020 norm. “I’d like it to go back to what it was,” he says. “And I hope in the future people get to interact more with the food icons they came to see. But protocols are protocols and we do what we’re told to do.”

“You need human interaction when it comes to food,” adds Mel Rodriquez of La Traila Barbecue. “Regardless of circumstances, we’d love it to be the way it was.” He points out that the reduced numbers also affected the city. “At this time of year, the restaurants are usually busier. This is just a different crowd in general this time.”

Other chefs, however, thought the revised format brought the food festival back to its roots. “It reminds me of the old days,” says Chris Lilly, the chef and pitmaster at Big Bob Gibson Bar-B-Q. “It’s less monstrous and huge. I went to the Burger Bash event, and while there were less people and fewer vendors, it was such a good vibe.”

The reduced capacity certainly helped with the preparation. “The staggering of entrances — it was huge to have that time to clean the station, reorganize, split product in two so we didn’t have product dying on the station. It felt more like a restaurant service,” says Mark Rosati, the Culinary Director of Shake Shack. “They did a great job for the chefs. It wasn’t a frantic reload, and there was beer and drinks and water. And there were breaks.”

After a year-plus of not knowing how or what you’re going to serve, having a mellow(ish) food celebration on the beaches of Miami isn’t going to get a lot of negative feedback from the chefs, who put up with more than enough unpredictability in the last 15 months.

“Look, I pride myself on adaptability,” says chef Justin Smillie of il Buco Alimentari, who pivoted to a ghost kitchen concept (Smillie Pizza) during the pandemic. “I can make you a snack at your house or pizza on the beach. I still get to touch beautiful ingredients every day. I’m fortunate.”

This is part one of two in our coverage of the South Beach Wine and Food Festival. Coming tomorrow: Your favorite TV chefs discuss how they survived — and sometimes even thrived — during 2020 and the biggest obstacles facing the hospitality industry in the next few months.

This article was featured in the InsideHook newsletter. Sign up now.

The post How to Pull Off a Giant Food Festival in the Last Days of the Pandemic appeared first on InsideHook.

The article How to Pull Off a Giant Food Festival in the Last Days of the Pandemic by Kirk Miller was originally published on InsideHook.